The study aims to study Imām al-Nawawī’s biography, to identify his thoughts on the perspective of ‘Aqīdah Islamiyah (Islamic faith), his methodology in explaining hadīth which is related to Sifat in Syarh Sahīh Muslim textbook, and factors impacted to his stand in ensuring his thought relating to ‘Aqīdah Islamiyyah. This study was based on documentary research and data were collected from primary and secondary sources. The data were analysed through descriptive method by applying two significant principles i.e. the deduction and induction. The outcome of study shows that the development of ‘Aqīdah Islamiyah (Islamic faith) of Muslims began with the thinking of Salaf which had been developed up to the first three centuries of Hijrah. The thoughts of Mu’tazilah, Qadariyah and Jahmiyah were also arisen. However, Salaf was developed after the third century to the fourth century, the thinking of Khalaf especially al-Asyā‘irah and al-Māturīdiyah, and also the thinking of Tafwid, were occurred. Actually, the appearance of Khalaf was not consistent to the thinking of Salaf in a small number of ‘aqīdah matters regarding to sentences on Sifat. Imām al-Nawawī was one of the scholars (‘Ulama) in the Shāfi‘ī school of thoughts  in term of Fiqh while in term of ‘aqīdah he held Asy‘ari. He was known by Islamic communities as the pundit of hadīth since he owned the depth background in various core disciplines such as Mustalah, Lughah and Tarājim. Therefore, he produced several academic works on different fields, especially Syarh Sahīh Muslim. He described hadīth which was related to Sifat focus on Aqīdah based, dual methods which include Salaf and Khalaf of both. He copital emphasized mostly in the thinking of Khalaf. He demonstrated the evidences which were specifically referred to the Khalaf texts such as those written by al-Māziri, al-Qādī Iyād  ect., without any comments. Among factors impacted his stand was; the role of various educational institutions(madrasah), strong support from the state, the Khalaf scholars (ulamā’) themselves supported the state, al-Asya‘irah as the formal school of the state, most people followed Khalaf and references based on the Khalaf. 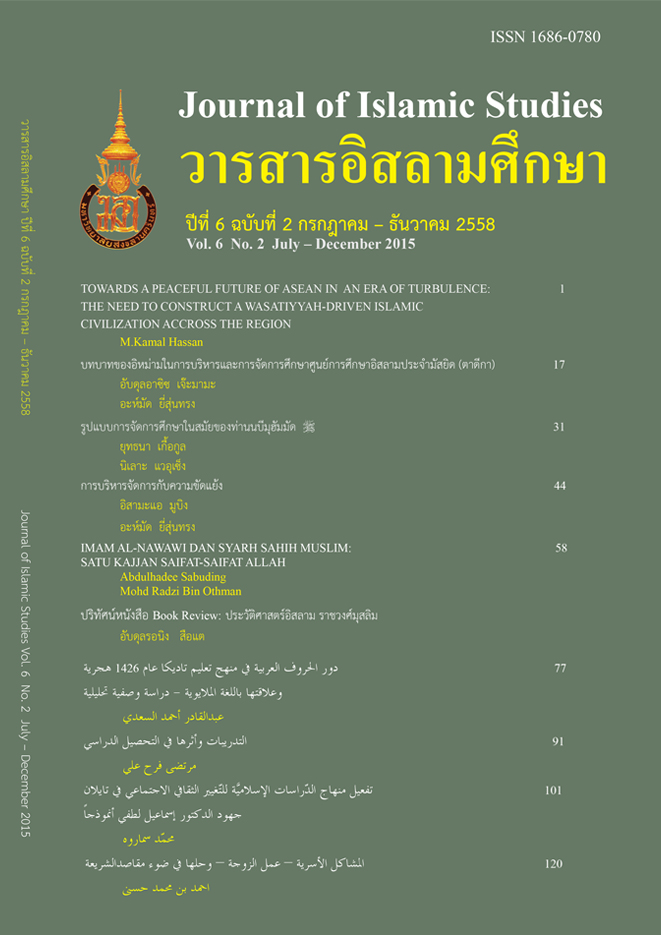 All articles Published in The Journal of Islamic Studies are author’s opinions, and not the responsibility of the Faculty of Islamic Sciences nor the editorial board. However any citation should be referred to the journal.