This research study aimed to compare the use of comparative statements in the Chinese version and the Thai version of Xi Han to investigate the similarities and the differences in the two literary versions.

The findings of the analysis of the similes and metaphors found in the Thai translation of the Chinese Annals of Xi Han Yan Yi (西汉演义) revealed that 2 methods of translation were used: 1. Translating into Thai by cutting out a comparative statement used in the Chinese manuscript probably because the statement was deemed insignificant, too difficult to understand, unknown to Thai people, or unheard of due to the projection of a cultural concept different from that in the Thai culture; and 2. Translating into Thai by adding a comparative statement that was non-existent in the Chinese manuscript. 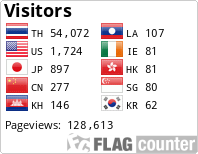