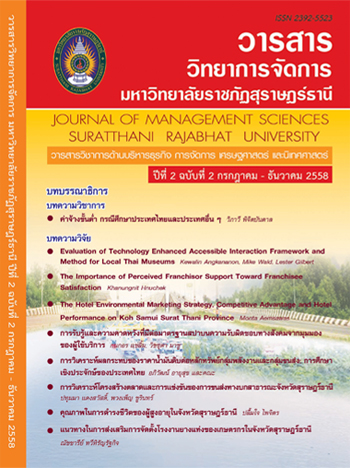 This research aims to study the market structure and non–price competition; to study the factors affecting Gravity Model; and to study the problems and difficulties of public land transportation development in Surat Thani. The samples were 231 public land transportation entrepreneurs.
The results show that the market structure of public land transportation in Surat Thani comprises five main companies. The first is Pantip Company (1970) Limited which provided a total of 20 bus routes: one bus route,ine minibus routes, nine van routes, and nine air-conditioned bus routes.The second is Theppanom Transportation Cooperative Limited. The company provides a total of 16 bus routes: one bus route and 16 minibus routes. Surat Sahaphan Company Limited provides 16 bus routes: 7 minibus routes and 9 air-conditioned van routes. Prasang Transportation Cooperative Limited has two minibus routes and Keaw Pratheep 1997 Limited offers one minibus route. The data was analyzed by using the partial concentration based on routes, it was found that the majority of concentration ratio in each route was 100.00, which represented a high concentration and high-level monopoly. Regarding the summary concentration based on Herfindahl-Hitschman Index, the majority of HHI of each route was 1.00. Considering
each route of companies, the market structure was categorized into the pure monopoly market. The analysis of the non–price competition showed that each entrepreneur emphasized on the competition at a high level. The analysis of the problems and difficulties showed that each entrepreneur emphasized on the problems and difficulties at a high level. The results suggested that the government was required to support passenger fares and solve traffic problem and running illegitimate route.