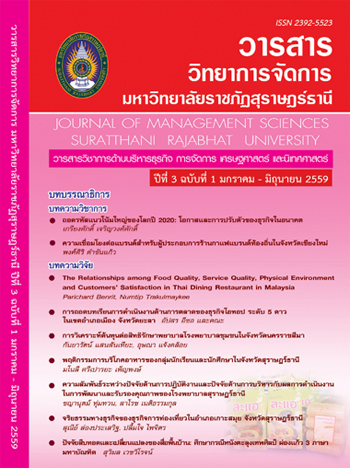 This research aimed to study operational and administrative factors and the operating result of the relationship between the workers and the management on the performance of hospital development and accreditation in Suratthani. Samples used were 335 hospital personnel.The basic statistic employed to analyze the data were the percentage, average, standard deviation, Chi-square test and correlation coefficients.The research found that factors in the overall development and management of hospital accreditation were moderate, except for theleadership of executives which was high. The results of operations for the development and hospital accreditation were moderate. It was found that there was a risk of illness from being run down. Environmental and workplace improvement was moderate. There was not anyrelationship between operational performance and accreditation. However the relationship between the executive overview was positively correlated with high levels of performance in development and quality assurance levels.