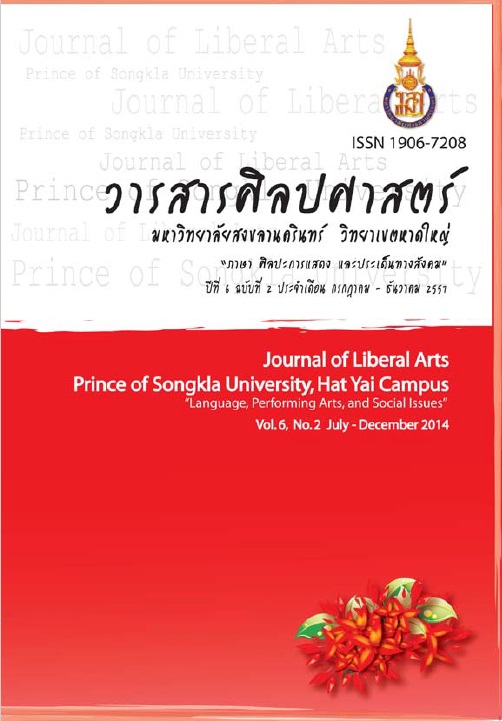 This research aimed to study the ability of the two youth groups—the production team including the performers and the audiences of the stageplay “Kaki” at Faculty of Liberal Arts, Prince of Songkla University—in logical thinking and analyzing the main characters’ behavior which affected the story advancement. This qualitative study interviewed the two target youth groups of 10 each. The results were presented as a descriptive analysis.

The study found that the youth, both the production team including the performers and the audiences, showed the overall non-significant different ability in logically thinking and analyzing the main characters’ behavior which affected the story advancement in the stageplay “Kaki” at Faculty of Liberal Arts, Prince of Songkla University. That was, the subjects did not accept the behavior of the female main character “Kaki” who was very sentimental and allowed herself to be infatuated by good looks. Letting lust rule her heart and as a result, did amoral deeds. However, they understood that such socially unacceptable behavior was partly caused by problems in her own mind and partly by the male characters’ behavior. They also sympathized with her yielding to the lust she possessed and appreciated her realization and admission of guilt. As for the main male characters, ThaoPhrommathat, Phraya Krut and Nat KuwenKhonThan, they admired those characters’ ability but did not accept the chauvinistic behavior, breaking the moral code of conduct through adulteration, and lied for their own sake. Nevertheless, they understood that such behavior resulted from being governed by lust and infatuation, just like the female character.