This research article had the objective for exploration to study factors affecting the poor households in Boualapha district, Khammouane province, Lao People’s Democratic Republic by using a mixed method approach. The data were collected by semi-structured interviews with representatives of the poor households and representatives of the households that were free from poverty. The obtained data were analyzed for content. There were 55 main informants. The results showed that the factors affecting poor households consisted of a total of seven factors: 1) For the factor of education, there were not enough facilities in the existing elementary school buildings. There was no secondary school in the villages. Educational personnel were not enough. Insufficient things included instructional equipment and materials, student uniforms, support budgets for development of educational personnel’s potential, and scholarships to support poor students. 2) For the factor of public health, there was no village health center. That made the public lack knowledge and understanding of health. They could not protect themselves from various illnesses. 3) For the factor of food, due to natural disasters such as droughts, floods, and disasters of war especially after the war was over, there were bombs that still remained in arable areas. That caused the living area to decrease; and the government came to help not thoroughly such as in the aspect of the irrigation system. 4) For the factor of housing, people’s buildings or homes were constructed unsteadily. That made their lives insecure enough to live. 5) For the factor of transportation, transport routes between villages to the district were bumpy. And there was no bus to travel between villages and the district. People were, then, not as comfortable as it could be. 6) For the factor of information, there was no broadcast tower in the villages. That made people lack awareness of information. And 7) for the factor of income, people still had low income. The average was around 6,000 baht/year or it was around 500 bath/person/month.  This was still lower than that being determined by the government agency, which was around 768 baht/person/month. The reason of people’s low income was because the income was based on their main occupation of rice farming only.

This work is licensed under a Creative Commons Attribution-NonCommercial 4.0 International License.

Ministry of Planning and Investment. (2014). From a survey of the Lao National Statistics Center: Vientiane.

Onladsamee, P. (2014). The role of the state in solving economic poverty in Houaphan province, A Thesis for Political
Economy, National Institute of Politics and Government, Vientiane: Lao People’s Democratic Republic.

________. (2015). Practice of assessing poverty standards and standard development according to the speech no.
309/PM, Vientiane: Lao People’s Democratic Republic. 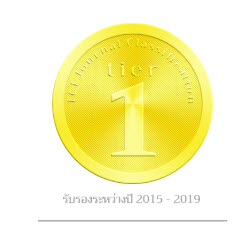