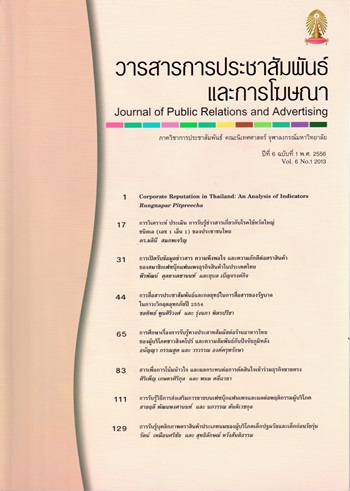 This research article "Government’s   Public   Relations   and communication strategy in crisis flood 2554" aims to study the role of public relations and communication strategy of the government during the flood 2554 in Thailand. Based on  the  documentary of  qualitative research methodology, all data collected from  news  of  two  publishers which are Thairath online and Manager online, Article Transcription from “Yingluck’s government meets people” radio program, Strategic National Action  Plan (SNAP)  on  Disaster Risk  Reduction  2010  –  2019  and the  minutes  of  the  Executive  Support  Center  Director and  hurricane flood and mudslides committee and The Flood Relief Operations  Center (FROC) daily meeting. The study examined the period of “Crisis stage” therefore all documents have been analyzed from October 2554 to January 2555.

The study has shown that government did not established a crisis communication plan which cost a loss of more than it should be due.  Slow response to the crisis than it should. The  government has set up  a temporary committee instead of  the Diaster department to  be the  communication center or WAR   ROOM  after flood  crisis hazarded two  months later which  reflects the  carrier is  not  good. During crisis stage, Sender or Prime ministers expressed concern or sincerity is not communicated as a good leader with credibility. In terms message, people do  not  get  the  facts or useful  information from  the public sector therefore people need to seek information from other sources instead. In terms of communication receiver, the government lacks of communication and public relations with both of  internal and external stakeholders. They did not realize the difference group of people that makes many people lack access to any particular group of people who had difficulty accessing the media. For communication channel, the study  is founded that government lacks of  efficiency  channels which were able to provide accuracy data to be useful for people preparing emergency happens. In terms of substance message provided, mostly of the government message  aims  to  public  relations as  a  government policy  and strategies  plan to  help people but lack the necessary information  to the people living in the affected areas and people in risk area for preparing themselves.

For communication strategies, this study emphasized on 3 conflict issues during the crisis stage. Government used strategy of  denial and excuse strategic claim in all  3  issues  as  follows;  Survival  Corruption Issue, Big  Bag  break down  or  public property destroy by people Issue and Conflict between Prime Minister and Bangkok  Governor on  Watergate opening Issue. Due to the nature of the crisis is a controllable crisis, the government must show responsibility. So people want to see more of responsible better than the justification defense.  Whether  the  blame  to  lower-level officials, to  blame  the  victims  or  the  public.  In conclusion, Government’s public relations and communication strategy in Flood crisis respond effect to  prime minister and government credibility, trust and reliance decreasingly. 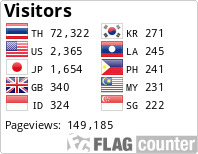