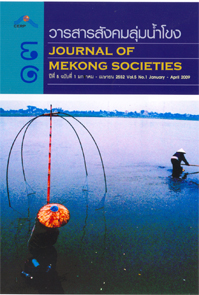 The objectives of the present article are to study 1) the development of Buddhist pulpit construction, 2) the precepts and beliefs concerning pulpit construction, and 3) relationship of the community in building and using pulpits in Northeast Thailand and Vientiane through documents and field work. The research instruments were observation forms and interviews. Data were analyzed based on the objectives and the findings were presented in descriptive form. The findings are summarized below.  The pulpit is an architectural art work used for Buddhist rituals or ceremonies; its traditional construction focused on both utility and aesthetic considerations. The pattern was developed according to space, economics, society, and beliefs. There were three kinds of pulpit structures: 1) a stand, 2) a stool, and 3) a tower or a movable throne with four posts supporting a spire. The construction was related to 1) factors from the Buddha’s biography, 2) factors from Dharma discipline, and 3) factors from tradition and moral precepts. There were many aspects of moral precepts and beliefs related to the use of materials and supplies. Regarding the community’s role in building and using pulpits, the research found that there was a relationship with the tradition of heet sib song klong sibsee, twelve-month ceremonies, especially for preaching during the Bun Maha Chat which was and still is very important เท Isan and Laos.  Currently the role of the traditional pulpit has decreased because in some areas it was replaced with the chair pulpit found in Central Thailand. in many areas, especially in Vientiane and big cities in the Isan region there was no effort to preserve old pulpits, and they were sold to antique collectors. When new pulpits were built, most of them were designed for utility only and not for aesthetic considerations.