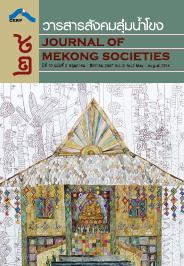 This paper is based on a study of the end of the World War II period, the beginning of the Cold War, and the role of the Chinese people in Chiang Mai’s economy. The study found that the Chinese people in Chiang Mai have played a very important role in the economy continuously since the World War II. Moreover, they increased their investments substantially in 1947s. They could get through the economic crisis because of significant strategies: trusting their business to reliable people, disguising their Chinese identity and becoming Thai, and turning the crisis during the war into an opportunity to trade.  Eventually, they became very wealthy. When the World War II ended, the Chinese people in Chiang Mai adjusted to changing economic circumstances by finding networks to enter government business, trying to influence high level bureaucrats, or encouraging a family member to join politics in order to protect their business and living conditions.  At the same time, they had to change their identity from Chinese to Thai to make it more convenient to engage in business.  Since 1947, their businesses have become varied and modern and include cinemas, restaurants, small department stores, and banks.  They have become entrepreneurs and have invested increasingly in the service sector because of the sophisticated lifestyle of the growing numbers of educated people.

How to Cite
Kittitornsakul, K. (2014). The World War II Era and the Beginning of the Cold War Regarding the Economic Role of Chinese People in Chiang Mai. Journal of Mekong Societies, 10(2), 215–237. Retrieved from https://so03.tci-thaijo.org/index.php/mekongjournal/article/view/21076
Issue
Vol. 10 No. 2: August 2014
Section
Articles