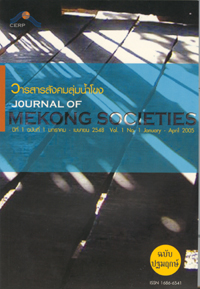 Previous researches on vernacular houses of the Tai-Lao ethnic group in Thailand indicate similar patterns in both physical appearance and domestic spatial arrangement. Those findings have two interesting aspects to explore further in this paper. One is a unique similarity that indicates a strong expression of cultural identity to the Lao living pattern. The other is documentation of the Lao ethnic group of northeast Thailand who originally migrated from todayûs Lao PDR. The research questions for further study are: 1) will those patterns share a similarity among the same ethnic group, and 2) is there a relationship between house styles across different areas. This paper aims to give an overview of vernacular house styles among different areas inhibited by the Lao people. Furthermore, the similarities and the differences among those patterns will reveal an understanding of the relations of the transformation process to their settings. The methodology of study for this paper has three parts. The first part is data from literature review, the second is from field research and the last part is an analysis and discussion of results from both sources.  Field research was conducted in Thailand and Lao PDR between 2003 and 2004. In Thailand the study area focused in the northeast region, in Khon Kaen, Mahasarakham and Roi-et provinces, where most of the Lao ethnic group resides, while Luang Phrabang was the selected study area in Lao PDR.  The findings indicate that Lao settlements share similar characteristics. Important features of community setting consist of housing areas located on hills, surrounded by rice fields in the lowlands. Lao communities are always located adjacent to natural water sources such as rivers, canals and ponds. The placement of these features depends upon beliefs and social norms. Houses in the two areas have similar patterns in both form and living culture. House forms can be categorized into three types: temporary houses, single-gable roofed style and twin-gable roofed style. The temporary house is built on a small scale using natural materials such as bamboo, grass and tree leaves. This type mainly is used as a temporary shelter for new families before moving into a more permanent house, which they will build after a certain amount of timbers are provided. A single-gable roofed style is not only the most popular one, but it is also built in the later period among the three styles. The twin-gable roofed style is the rarely found in both areas since this style was built prior to the single-roofed one. Even though the Lao houses have different styles, their domestic spatial arrangements are similar. The main house is used for private activities of the family and consists of three areas: an ancestor spirit worship area, a sleeping area for parents and a room for daughters which is sometimes reserved for a new family. A veranda runs along the longitudinal side of the main house. Adjacent to the veranda is a kitchen unit, which is normally separated from the main house and located near the daughterûs bedroom. This spatial arrangement reveals the social structure in the house. Menûs spaces are placed in the front, while the womenûs world is in the back, near the kitchen unit. House styles and spatial arrangements of the two areas show the transformation in adapting physical and social behavior into their settings. In Thailand, where the weather is warmer and more humid, the houses are more loosely constructed in order to gain more natural ventilation for comfort. The house style built in later periods is transformed by external factors because of the need in appearance, while interior spaces are still arranged according to social and functional needs.

How to Cite
Thungsakul, N. (1). Vernacular House Styles of the Tai-Lao Ethnic Group in the Northeast of Thailand and in the Lao PDR. Journal of Mekong Societies, 1(1), 113-133. Retrieved from https://so03.tci-thaijo.org/index.php/mekongjournal/article/view/10646
Issue
Vol. 1 No. 1: January - April, 2005
Section
Articles