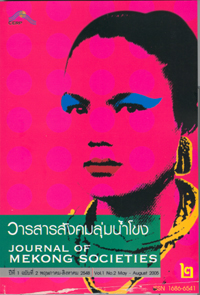 This paper presents the presentations of Lao history in the Lao textbooks from the Independent period, starting in 1949 to the Early Socialism period, starting in 1975. We designate the year 1949 as the starting point of our study as it was this year that the Royal Lao Government (RLG) proclaimed independence from France on 19 July. It was also this year that Lao gained international recognition as an independent state, although it was still within the French Union. At the other end, we take the year 1986, as it was the year that the Lao Government declared the new policy “Jintanakarn Mai,” which involved a number of changes in Lao social structures. Our purpose is to show that history was manipulated by the Lao governments of both periods as a mechanism to transfer the national social values to the younger generations through textbooks used in school education. Our analysis is based on the Lao textbooks used during the Independent and the Socialism periods (1949- 1986). Presentations of this paper are in two parts: 1) the Lao history in the Lao textbooks of the Independent period (1949-1975), and 2) the Lao history in the Lao textbooks of the Early Socialism period (1975-1986).