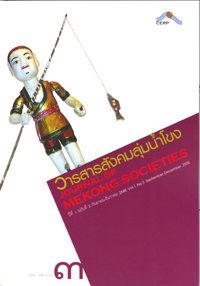 The Tai- mene is an ethnic group residing in villages in Bolikhamsai province in the Lao PDR. In the past, they lived in Chiang-men village of Nghe-An province in the Vietnam. The Tai-mene people emigrated to and settled in the Lao slightly less than 80 years ago, but the up-to-date information on the exact number of them is notavailable. There are about 30,000 of Tai- mene people. Linguistically, the language of the Tai-mene people belongs to the Tai Language Family.  The Tai-mene are well-known for their individual names and the process of naming people. Not only does the name show the unique characteristics of the Tai-mene culture, but it also play an important role as a device for strengthening relationships and creating harmony between people in the community.  In the naming process, parents first give a name to their child by consulting with a more-mon, or a spiritual specialist in the village so they can have a name that is spiritually suitable to the date of birth of their child. They believe that auspicious names benefit the child. If the date of birth does not go together with the gender of the child, the name must be changed to make the connection between the both factors. For example, if a female child was born on a male day, the name must indicate the female sex of the child. Similarly, if the male child was born on a female day, the name should specify the male sex of the child.  Later, during the first one to three years, if the child has a chronic illness, the Tai-mene believe that it is caused by an unfit and inauspicious name. Consequently, they change the name of the child. Nowadays, 80 percent of Tai-mene people have a second name, which has become their permanent name. The second name generally begins with the word mai, meaning “new,” followed by the same old name or the new given name such as mai nang, the previous name being nang.  Apart from the child’s family members, the more mon and elderly people in the village play a vital role in giving the second name to the child.  In doing so, they hold a ceremony or cast lots to find the right person to name the child. After receiving the second name, the child and his or her family generally have a relative-like kinship with the family of the person who gave him or her the second name.  As a result, the naming process is not simply giving a name to a person, but it is a kind of wisdom of the Tai- mene to stimulate social interaction in the community. Moreover, it also reflects the idea of living in harmony in a community linked through this naming process. However, the culture of naming people in the Tai-mene ethnic group would disappear if the government applied the more conventional record system because the certificate of birth and house registration would identify only the first name, and the traditional naming process would finally fade away.

How to Cite
Chanthao, R. (1). Historical and Naming Process of the Tai-mene: Influences of Culture on Language. Journal of Mekong Societies, 1(3), 149-166. Retrieved from https://so03.tci-thaijo.org/index.php/mekongjournal/article/view/10606
Issue
Vol. 1 No. 3: September - December, 2005
Section
Articles