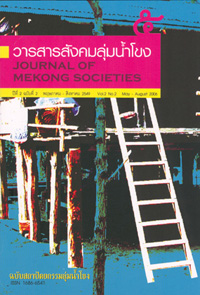 This article points out that the pluralism and complexity of Asia, especially Siam, is explicitly different from the West not only in geographical settings, but also in the history of human settlements, urban origins, urban evolutions, and socio-cultural elements. Unfortunately, the region lacks its own theories and concepts in urban studies, which may be a major problem as it tries to find its own suitable and appropriate paths for its future.  Nonetheless, the awareness of being completely different from the West is the first step on these paths.  The article begins by looking at differences between Siam and Europe in terms of their history of urban forms and socio-economic factors from the early stages to the present.  It ends by discussing the challenge between the ‘having’ and ‘being’ of the people in Siam nowadays.  Though having the most modernized items in their daily life, most Siamese can be still identified as rural in their behavior, norms, and values.