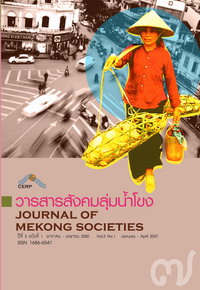 The Bru are a Mon-Khmer ethnic subgroup who speak an Austroasiatic language. Bru translates into English as chumane or cmountaineer.e The Bru immigrated from Savannnakhet province in Laos to Ban Phoe village l, in Nong Khai province (Si Chomphu sub-district, Soh Phi Sai district). The Bru are one of various ethnic groups in Laos who were enslaved during French colonization and were given the derogatory name Kha, meaning cslavee. The Bru have to invented and adjusted identity under changing situation. The Bru apply customs, culture and myth as ethnic boundary. For example, Boon Duan Sam festival and Nang Sri Chom Poo Myth. They invented new representative group from the slave to the power man by various government policies. Their culture is difference to another groups result to problem when they interact with other group but not serious because of its adjustment. In conclusion, the Bru have to invented and adjusted themselves under changing situation, therefore, their identity has never been fixed. The ethnic invention of Bru people in the Pho village according with reflected the way to change their identity under changing situation.